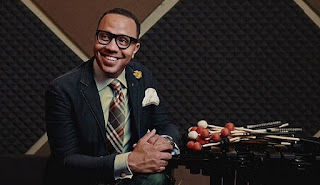 Joining us for Episode 150 - can you believe it?! - is Drew Tucker: musician, educator, and social entrepreneur.  He advocates for the arts in underserved areas of South Florida.  In addition, he has gained notoriety for jazz-influenced twists on modern pop standards.  His teaching covers all realms, including drum corps, and he can often be seen wearing one of his signature "IT'S NOT A XYLOPHONE" t-shirts.

0:00 intro and hello
1:10 MalletLab Summer Camp
8:40 Story behind "It's not a xylophone"?  Using branding and social media.
13:40 Any short comings of the social media culture?
17:03 Ben: Mike Mainieri
28:10 Casey: what's the sound?
37:00 Upcomming plans for MalletLab?
40:42 Thoughts on majoring in music education and public school
teaching
43:20 Advice on starting a career in performance.
48:55 Musicality and technique.